The Career of Genghis Khan

The Career of Genghis Khan

An Outline of History – By H. G. Wells. ( The Career of Genghis Khan )

In the passage from the essay, “The Career of Genghis Khan”, in “The Outline of History”, H. G. Wells giving an account of the career of this great Mongol conqueror, says that, The mongol raids were the last worst of all the nomadic raids upon the civilization of the East and West. 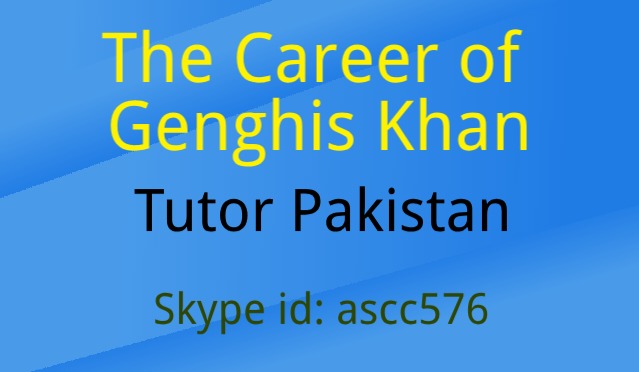 The settled societies of civilization and the wandering tribes of nomadians existed side by side in history. Each had a distinctly separate way of living, entirely all its own. By and by, civilization grew better organised and more and more wide spread. At the same time, the nomads become more and more intelligent, mobile and armed.

The nomads are not civilized, it is true, Nevertheless, they are a people specialized and specializing in a particularly peculiar way, exclusively their own.

Civilization and nomadism have affected and influenced one another from the earliest times. After a certain period of greatness and glory,civilization, more often then not, begins to show signs of decay. Affluence leads to dissipation in luxury. Debts grow. The people grow as slaves of the rich and powerful. Convictions weaken. Worn out principle, exhaust energy and stunt growth.

At last, when the rot sets in too deep, nomadians descends upon with all the fury thunder of a terrible storm and demolishes the entire sluggish structure of civilized society so that the world may have a chance to build it again on fresh, healthy foundations.

The onslaught of mongol nomadians in the thirteenth century, was one such raid, the last and perhaps the worst of its kind. It was, no doubt, a relentless force of destruction for the civilized world of its period. But at the same time, in one way or the other, it had beneficial effects as well.

Very little is known about the history of the mongols before the close of the twelfth century. We first meet them in the country lying to the north of China, This also happened to be the homeland of Huns and Turks, who also belonged to the same ancestors or racial origin as the mongols. The mustered under a single chief. The dynamic leadership of his son, Genghis Khan extended their power and influence with terrific vigor and lightening speed.

The eventful life of Genghis Khan and his successors astonished the world, but it astonished the mongols even more. In the twelfth century the mongols were nothing more than simple tribes of nomads. They were subject to the Kin, the then conquerors of north-east China. A horde of nomadic horses, they lived in tents and fed themselves on mares milk and meat. They hunted and kept herds for food. They moved to the north in summers as the snow melted, and to the south in winters. Always wondering in searching of pastures they lived after the custom of vast grasslands in the steppes of the north. They revolted against the kin.